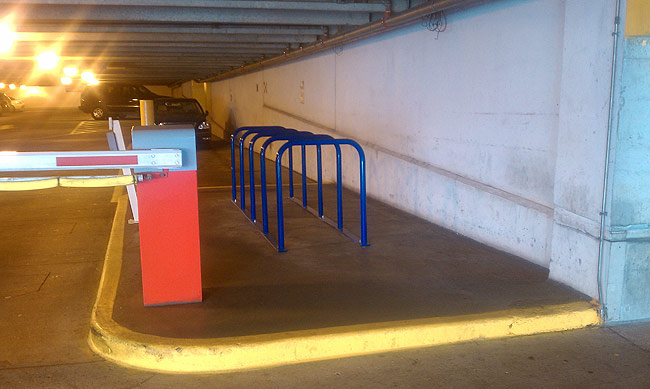 Metro Louisville plans to add hundreds of new sheltered bicycle parking spaces within walking distance of the new KFC Yum! Center and the first pilot spaces have already been installed. Bike Louisville has partnered with the Parking Authority of River City (PARC) to install dozens of bike parks in downtown garages.

The first basic-style bike racks have already been installed in two downtown car parks and are shown in the photos below. You can try them yourself at Fourth Street Live! parking garage on 5th Street or the Louisville Gardens Garage between 5th and Armory Streets. A 5-clip bike rack like the ones installed all over town can hold ten bikes securely.

The original plan was to have all the bike racks in place for the arena opening, but a small hitch occurred: PARC was concerned about the color of the bike racks. Yes, it’s true… the color. The city originally purchased three green staple brackets to install in the garages, but PARC was concerned that the green would conflict with the blue it uses for the garage signs. Because, you know, that would have thrown the whole feng shui out of the parking lot aesthetic.

Don’t worry, declined green supports won’t be wasted. One has already been set up at the Bluegrass Brewing Company on Theater Square to help with planned BBC Bike Parties. (Any suggestions where two more 5-staple racks might be useful downtown?)

By installing these bike racks in parking garages, Bike Louisville hopes to increase the safety and convenience of parking bikes. In addition to being sheltered from the weather, the bike racks will be located within view of the parking attendant, so there will be supervision of the bike racks most of the time (depending on the garage).

The bicycle parking project is funded by a CMAQ (Congestion Mitigation and Air Quality) federal funding program of 80-20%. PARC agreed to pay the 20% local contribution. Gowin estimates that basic rack parking spaces cost around $100 per bike.

It will likely take several more months to install the remaining proposed bicycle parking spaces once proper state approval is complete. Once the state approves the funds within the next 30 days, the contract will be announced for 21 days and a contract could be in place in two to three months.

Branden founded Broken Sidewalk in 2008 while practicing architecture in Louisville. He continued the site for seven years while living in New York, moving back to Louisville in 2016. Branden graduated from Washington University’s College of Architecture in St. Louis and has covered architecture, design, and architecture. urban planning for The Architect’s Newspaper. , Designers & Books, Inhabitat and the American Institute of Architects.