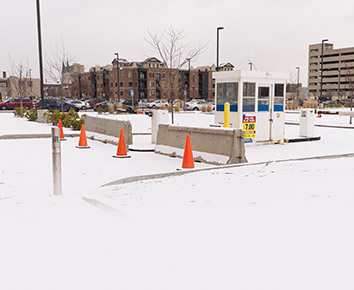 What once seemed unthinkable, with the abundance of downtown surface land, is becoming a reality. The central business district faces a parking shortage.

Parking on the east side of downtown is becoming harder to find — enough to prompt some rates to rise — thanks to a trio of building developments replacing surface parking lots.

“These spaces are shrinking fast,” Denison Parking CEO Mark Pratt said of the surface lots. “We may see more [parking] shuttles over time.

The downtown section known as the Market East neighborhood has lost nearly 700 spaces since September, starting with the closure of parking along East Washington Street north of the Marion County Jail to make way for the construction of the $20 million IndyGo Transit Center (see story, page 17).

To the east, across from the City-County Building, the parking lot bounded by East Washington and Market streets closed at the end of the year as Cummins Inc. prepares to build its 10 $30 million floors.

Indianapolis-based Denison Parking manages 62 properties in the city and operates the two city-owned lots on which Cummins and Flaherty & Collins are building.

Overall, more than a quarter of the 2,560 parking spaces in the Market East quadrant will disappear, Pratt said.

The lost space count includes the 66-space lot north of Wabash Street and north of the Flaherty & Collins development. It will be closed for about two years to accommodate construction machinery, until the project gets off the ground.

Adding to the parking dilemma is the temporary closure of a 315-space garage west of the City-County Building on East Market Street that won’t reopen until this summer.

The pressure led Indianapolis’ EZ Park to raise rates earlier this month for daily users of two of the surface lots it operates. Daily rates on the 150-seat lot across from the Marion County Jail were increased from $6 to $8 and from $5 to $6 on the elevated lot at South Alabama and Maryland streets.

Ramp lot attendant Tina Carr said the number of daily parking lots there, most of whom are visitors to the City-County Building, has more than doubled to 100 since the three surface lots closed.

“It fills up first,” Carr said of the EZ Park lot across from the jail, “and then they get here.”

Carr is also seeing greater demand from monthly users. The closure of the land north of the jail set off a domino effect, pushing senior Sheriff’s Department officials into the city-owned parking lot to the south along Virginia Avenue. These movements, in turn, threw prison employees into the high ground to the east.

“They don’t have room for us there,” a prison worker said, referring to the parking lot. She said prison policy prohibited her from providing her name to the media.

The Virginia Avenue garage, built to accommodate crowds at events at Bankers Life Fieldhouse, still has capacity during business hours. Denison, who manages the facility for the city, will hang a huge 25-by-25-foot banner from the frontage alerting motorists to the parking option in light of lot closures. The daily rate will remain at $8 and not increase, Pratt said.

Denison will also place signage along Alabama Street to help direct traffic to various other nearby parking options.

Parking is not completely disappearing; it has just moved into the garages. The Market Square project alone will add 600 parking spaces. The Flaherty & Collins project, dubbed 360 Market Square, is also expected to generate $1.5 million in annual property taxes on a site that produces nothing.

The Cummins parking garage will have approximately 400 spaces, but none are accessible to the public.

The loss of so many spaces in such a short time prompted Downtown Indy to launch a parking study in conjunction with Indianapolis-based Walker Parking Consultants.

Fred Laughlin, who retired from downtown Indy late last year as vice president of management services, still does consultancy work for the organization and serves as a resource person for the study.

The parking analysis, which is expected to be completed in July, will examine the east side of downtown, from bustling Massachusetts Avenue to the Market East neighborhood.

Laughlin argues that the loss of about 1,000 spaces on this side of downtown hardly affects the number available in the entire central business district: a whopping 74,350 in 2013.

“It’s funny how emotional people are about their parking spot,” Laughlin said. “People are going to have to walk a block or two to find parking. But it’s available, and it’s relatively inexpensive.

The northwest side of downtown lost a large parking lot to the Flaherty & Collins’ Axis at Block 400 apartment project, anchored by a Marsh Supermarkets store. But the parking lot built on the site helped mitigate the losses, Laughlin said.

Other mixed-use developments with parking components, such as TWG Development LLC’s Pulliam Square project being built on part of the former Indianapolis Star site, are also expected to have public parking.

But the pain could get worse on the east side of downtown before it gets better. Pending lane restrictions on Wabash and Market Streets related to the construction of Flaherty & Collins’ 360 Market Square project will make parking access on the east side of New Jersey Street even more difficult.

The 1,800-space garage still has plenty of availability, Pratt told Denison, despite having 300 spaces reserved for Artistry apartment residents. Once the completion of the second phase of the project is completed, an additional 300 places will be swallowed up.

“It’s an increase in demand and a decrease in supply,” Pratt said. “Car parks are quite a sought-after product at the moment.”•