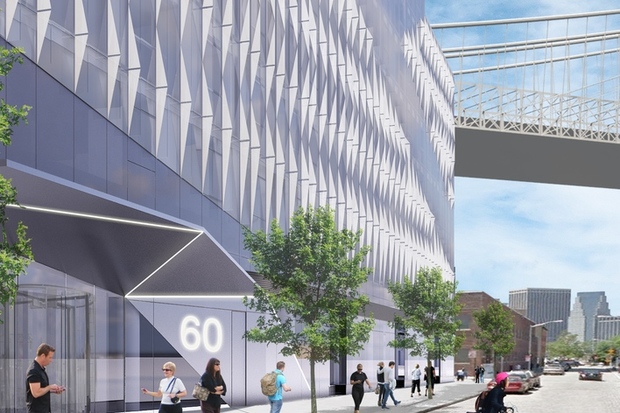 The spaces will be located in the underground parking garage at 60 Water Street.
See the full legend

DUMBO – There’s a new option for parking in the car-crowded DUMBO – but it’s not cheap.

The underground garage at 60 Water Street is now open with 300 spaces at a price of $ 450 per month. The 24-hour garage has three levels, has self-parking and drivers do not need to be residents of the luxury building to access it.

Parking spaces are also available for daily use, relieving a neighborhood that is overrun with visitors on weekends.

“Parking is a major problem here,” said Hide, a DUMBO resident, who wrote a blog about the neighborhood called DUMBONYC. “With the increase in the number of tourists and businesses in the area, additional parking space relieves the burden of cars circling around city blocks looking for limited parking on the street. “

Hide added that many garages have closed in recent years, including the Old Fulton parking lot and the lot at 90 Washington Street which had 250 spaces.

A garage attendant at 60 Water Street said there had been a massive demand for parking spaces on weekends.

“There are a lot of daytime parking lots on weekends,” he said. “The spaces fill up and sometimes we have to push people back.”

The building, designed by LEESER Architecture, is expected to be completed this year.

Commuters concerned about lack of parking at Metrorail garages

MIAMI-DADE COUNTY, Florida – Ridership on the Miami-Dade County Metrorail system is on the rise, but parking lots are the same size they were when they were first built in the 1980s.

This has caused frustration among commuters, who say they need more space to park.

Margo Siewert contacted Call Christina, concerned about the lack of Metrorail parking at the Dadeland North and South garages.

Siewert said that since mid-January, Dadeland North, the garage adjacent to the Metrorail was completely full by 8:30 a.m.

According to Siewert, the increase in ridership stems from the fact that the Brickell area is now the second largest financial district in the country.

“They’re constantly promoting bringing in new business and Miami is doing the same,” Siewert said. “If we don’t have the infrastructure to support this, we have to do it today. We are already too late.”

“For the very first time we are seeing people use the Metrorail. The ridership, even in the eight years that I have been riding, has increased dramatically. I would say it has even doubled,” said Siewert.

Some of the commuters who spoke to Local 10 News from areas like Palmetto Bay, Pinecrest, Cutler Ridge and Homestead said they had only recently started using public transportation to avoid bumper-to-bumper traffic. ever-increasing shocks along the US-1.

During the first five months of 2015, Metrorail ridership increased at a rate of 2% compared to the previous year, with an average boarding of 76,300 people on weekdays. Over the past five years, total annual rail ridership has increased by 24% and average weekday ridership by 22%.

“We have grown as a community, we have grown as an urbanized area and one of the things is that there are growing pains associated with it,” said the director of transit for the County of County. Miami-Dade, Ysela Llort, “People who chose public transit made a great choice not only for themselves, but also for others in the community.”

Miami-Dade Transit said that every 72 hours, riders of the Miami-Dade County transit system pay about $ 1 million in fares. On a daily basis, the system costs around $ 1.5 million to operate.

“Just to be clear, the fares charged into the rail system only pay for about 28% of that service. It’s heavily subsidized but it’s a great public service,” Llort said.

Commuters believe their money should go to a new parking lot, but a Metrorail official said the money is being used to run the Metrorail.

Llort said she had been in contact with landowners in the Dadeland area to see if they could build around 100 to 200 additional parking spaces. However, she still urges users to think about alternatives.

“We don’t have a bigger garage in the Dadeland area in our program, but we do have a series of park and ride lots along the bus lines. We urge people to look at the alternatives, or even use a different station, ”Llort says. “This would save money and aggravation.”

Albert Hernandez, deputy director of engineering, planning and development, said his team is currently working on creating an app to help commuters know how many parking spaces are available in a parking lot before s ‘get there.

“A rider will be able to access his application via his iPhone or Samsung device and know the parking spaces available in each of the garages,” said Hernandez. “Not only through the app, there will be an electronic sign in front of the garage which will also display this information.”

According to Hernandez, the technology won’t be able to tell you exactly what spaces are available due to the cost. However, there are sensors at the entrance that will tell you availability at ground level but not at space level.

“We are advertising the construction this summer,” Hernandez said. “It’s going to take about a year for this to be in service, so we believe that by summer 2016 this technology will be available.”

Miami-Dade Transit has said it has no plans to build another parking lot, a response Siewert finds insufficient. Siewert also doesn’t think the alternative to the bus will be useful.

“There are only certain bus lines that can accommodate this,” Siewert said. “Living in Homestead, I’m about four miles from the nearest bus parking lot. I should go four miles west instead of just jumping on the toll highway and going north, to get to Dadeland. “

Siewert said: “The problem exists today. It will only get worse and they have to think about the future now.”

Copyright 2015 by Local10.com. All rights reserved. This material may not be published, broadcast, rewritten or redistributed.