Is saving parking by standing in it kosher in 415? : SFist 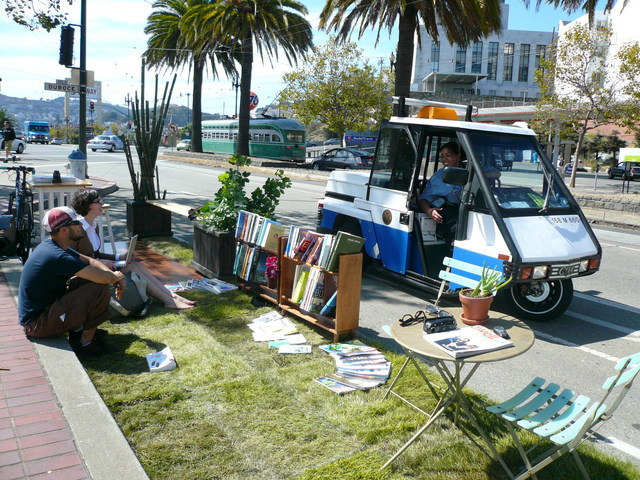 I lived in a few places before I moved to SF, but nowhere else have I seen people “save” parking like they do here.

I’m talking about how someone will stand in the middle of a public parking space on the street (with or without a meter, parallel or perpendicular) to â€œguardâ€ it for a friend who is presumably on his way to the area.

Is it really a San Francisco thing? A guy was doing this while I was looking for parking in the Inner Sunset the other day, and when I said “hey, man, this is not cool” he said “this is how it is. we do in 415, ask anyone from here! “Me too.

First, a few caveats. Since I have never lived anywhere other than San Francisco and have not driven much elsewhere, I cannot really attest to the prevalence or lack of saving of parking space in others. cities. Second, I didn’t start driving until I was 30 and I’m not a good parallel parker.

But I admit to having done it, Once. I was in a car with two other people. I believe it was in North Beach on a weekend night. We saw the place across the street but there was no way to turn around (illegal) so the driver had to wait at the traffic lights to make the U-turn. I jumped up and ran across the street to stand in the space. I think it all took maybe two minutes, at most, and no one tried to park in it while I was there, so I didn’t get a chance to shout, “C ‘ is how we do in 415, bitch! “

Not that I would, because, seriously, this is crazy.

A native SF compatriot answered this question on Yelp Answers (of all places) several years ago, and his take was that it was frowned upon if you stood in one place and waited for someone to arrive for 10 or 15 minutes, but, ” Maybe I could see an attempt to claim possession if your friend was less than half a block away. “But it should be noted, as a warning, an incident in 2006 in which a 19-year-old man was fatally stabbed as a result of the practice ?? a friend was standing in a parking spot on Geary in the Inner Richmond, keeping it to himself, another car pulled up and parked in it, physically knocked him out, and the 19-year-old came back , found the seat taken, got into a fight with the guys in the second car and ended up dead.

I asked ten other residents to save parking spaces. Some of them were natives, others were long-time residents. Almost all admitted to having done it at least once, while those who did not say “What?” No ! I would never do that! This is terrible! Those who admitted to doing it did so with a bit of embarrassment, conceding that it’s a pretty crappy thing to do. They also wanted to make sure that if someone came by car to want the place before their friend arrived, that they would give it up altogether.

The only story I heard about saving parking and maintaining the lot involved my dad in the 1970s. He was the driver and his friends took a seat while he circled around. one block from Chinatown. When he arrived there, he found his friends arguing with the driver of another car. Eventually this guy gave up and left, and my dad got the seatâ€¦ only for the driver of that rival car to be sitting in front of them in the very cinema in Chinatown they were going to. (No lives were lost and the film was viewed without incident.)

The question made me curious about the laws surrounding safeguarding parking spaces and how the police might handle such a situation if they encountered them. So I asked a local – and San Francisco native – police officer Dustin Daza of SFPD’s Park Station about it. Here is what he said.

It is illegal to do so. If I saw someone saving a parking space it would be a very low priority for me to get involved unless I felt it was a danger to that person. If anyone complained, however, or if we got a call, I would advise the “Saver” that it is illegal to stand in the street. This is a violation of 21956 (a) CVC, which is pedestrian on a roadway. The way the California Vehicle Code defines a road is curb to curb, which includes parking spaces. So basically I would just tell “the saver” that he has to move before I write him a ticket. I’m more in the spirit of the law about these things as opposed to the letter of the law. Parking spaces belong to everyone. You can’t call dibs in a public parking space by sticking a human in the street. I’m originally from San Franciscan, but I’ve never heard anyone say “this is how we do in SF”.

As we all know, parking in San Francisco can be the absolute worst, and desperate times sometimes call for desperate action. But there’s no unwritten rule everyone follows “from here” that it’s perfectly okay to save a spot by standing in it.

Rain Jokinen was born and raised in San Francisco and, miraculously, still lives in the city. His future plans include becoming a millionaire, buying a condo complex, and then demolishing it to replace it with a dive bar. You can ask this native San Franciscan your questions here.

In these Troubled San Francisco Times, there’s a lot of talk about who was here when and what that means (or doesn’t mean). With the goal of both helping newcomers and bringing long-time residents back in time, we bring you Ask a San Francisco Native, a column written by Rain Jokinen, SF native and longtime SFist contributor. , which is inspired by a similar one on our sister site Gothamist, and aims to put an end to all those questions that only a native of this city can answer. Send yours here!