SARASOTA (WWSB) – The new St. Armands parking garage was not only packed with cars Monday morning, but also with dozens of Sarasota city leaders and residents who were there for one thing…to celebrate the new addition. to the region.

The garage is located on N. Adams Circle and has over 500 parking spaces. It costs 50 cents an hour. It was opened to the public in February. City officials say it has since made it easier for visitors.

“It turned out to be really nice,” he said.

“Confusing parking payment and not visible enough to notice. Unmarked spaces making it difficult to know which space is being paid for.

This has been forwarded to the parking service. They say they researched and interviewed locals and came to this conclusion:

“The machine we have here today was chosen 80% of the time by the people we interviewed,” Lyons said.

Some local business owners say the garage helps boost business in certain areas of the Circle. For other purposes, they say their customers are more worried about not getting a ticket than enjoying their shopping experience.

“They won’t shop, they say they can’t come back because they don’t want a ticket,” said Just/Because owner Barbara Pugliese.

The city claims to have provided different payment alternatives, including an app. Some business owners say that not all of their customers use it.

“Not everyone wants to do that. Our demographic isn’t using the app as much as it should,” Pugliese said.

According to the parking service, they have made some changes to make it easier to pay at the meter. They say if there is a need in the future, they will continue to perfect it. VAIL – Free public parking reverts to the Vail Village and Lionshead parking structures starting at 6 a.m. on Monday April 22. This includes free overnight parking until May 24, when a $ 25 charge will be applied to discourage vehicle storage.

The summer parking program will run until October 7 and will include free access to structures during the day for all users as well as free public access to the new red sandstone parking garage on North Frontage Road. As an additional option, overnight parking in the Red Sandstone Garage will be available free of charge for up to 72 hours throughout the summer.

Parking passes issued for the 2018-2019 season, with the exception of Rose passes, will be exempt from overnight charges. Other exemptions include employees who work nights at Vail Village or Lionshead, as well as guests from lodges with limited on-site parking. Current pink pass holders who will be working night shifts during the summer are urged to contact their employer to make arrangements with the city parking pass office to obtain a parking pass for the summer without charge.

Value card holders will be able to use their passes for free daytime access to Vail Village and Lionshead parking lots this summer. If the vehicle is parked in either structure between 4 a.m. and 5 a.m., a fee of $ 25 will be billed to the card. As in previous years, Value card holders will need to bring proof of eligibility to city parking offices in November for recertification.

The Fresno City College community will hear which company will build the new parking structure that was approved by the State Center Community College District Board of Trustees at its April 2 meeting.

The district plans to use “Design Build” in the process of choosing a contractor. There is currently a bill that uses Design Build terms to help find a good contractor.

“Community colleges are permitted to use the Design Build procurement process through an assembly invoice, but [that assembly bill] has an expiration date of December of this year,” said Christine Miktarian, vice chancellor of operations and information systems for the State Center Community College District Board of Trustees.

Three separate contracts for an architect, a mechanical-electrical plumber and a parking designer were all awarded on April 2, in preparation for the release of board documents for a parking contractor.

“The contracts that are on the agenda are for the consultants who will put together our transition documents to be released for a request for proposal to design-build contractors,” Miktarian said. “We have not yet determined how we are going to do the basis for the attribution.”

She explained that the district typically chooses the lowest bidder when using a design bid invoice, adding that “through a design and build process, you can look at the contractor’s experience and his design that he will submit to us and the price.”

Most people who attended the April board meeting, including some members from the surrounding neighborhoods, expressed a preference for building the parking structure because it would reduce a lot of stress. A few speakers questioned the wisdom of spending college funds on parking structures rather than meeting the specific needs of their departments.

The district had polled many students and faculty on what they thought was most important before determining how the funding would be spent.

The Parking Study was part of the Facilities Master Plan which identified the structure as a primary focus. It was sent to Community College districts.

Lots to love about the new parking spots app 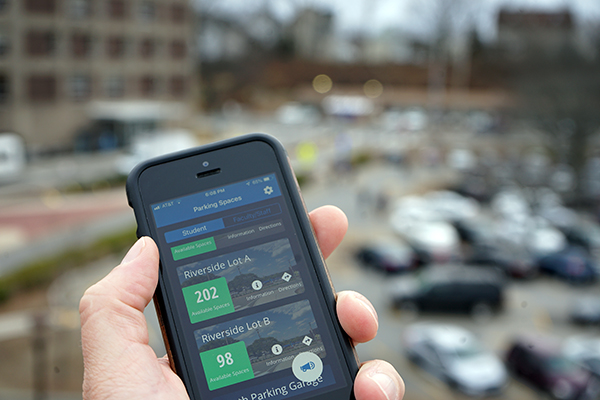 With the new Parking spaces application.

Developed by Web Services, the Parking Spaces application indicates the number of spaces available in the car parks of the North, South and East campuses and on the Riverside A and B lots. The free application, which is currently only available on the platform. -Apple iOS form, includes directions, hours of operation and accessibility information for each location.

The availability of on-campus parking is monitored by the university’s UCard, Access and Parking Services (UCAPS) office based on data collected as vehicles enter and exit through garage and lot gates. Recent infrastructure upgrades for the East Garage and Riverside Lots have made it possible to include their door data in the app.

“Adding this information to the app allows people going to campus to plan their trip and reduce the time spent looking for parking spaces, which ultimately reduces our carbon footprint,” says Jon Victorine, Director of UCAPS and Security Technology.

The new app allows users to customize the bundles they see on their phone. As with the previous version, it also includes an audio option that “talks” about the number of spaces available.

Victorine says that the inclusion of the Riverside lots, which are widely used by suburban students, gives UCAPS a more holistic view of parking availability on the north campus.

“And the East Garage is used by a lot of our community for events, so it’s invaluable for us to have action on it,” he says.

According to Web Services Executive Director Gerry Nelson, iOS accounted for 72% of users of the previous app, which was downloaded over 1,000 times on iPhones.

Sam Diep of Web Services programmed the new app (along with the previous version), while senior web designer Ferney Lopez and front-end developer Allen Williamson were responsible for the design.

“We are very happy with what web services have developed in terms of usability and updated interface,” says Victorine, who hopes to see the Broadway / Riverview lot on the south campus added to the Parking Spaces app later. .

An ambitious multimillion-dollar plan for Birmingham that would add hundreds of parking spaces, as well as new housing and businesses, is taking shape.

Walbridge/Woodward Bates Partners recently presented their proposed project, which Commissioner Rackeline Hoff called “one of the greatest projects to come to Birmingham”, and Mayor Patty Bordman agreed it would “impact many people in different ways.

In the proposal, the North Old Woodward parking structure would be demolished, a new one built in its place, and retail buildings added to the site, as well as mixed-use buildings on surrounding properties. Bates Street would be extended and a plaza would connect the street to Booth Park.

“In terms of meeting parking needs, this is being done while incorporating planning goals for the downtown core,” City Manager Joe Valentine said. “From the city’s perspective, (the proposal) achieves two key goals with one project: finalizing the implementation of the downtown master plan and expanding downtown parking.

The project has an estimated cost of $133 million between public and private investment. Local voters would have to approve a bond to provide a funding mechanism, but Valentine said taxpayers wouldn’t see an increase because no public money would be used.

Residents at the meeting again expressed concerns about impacts to homes and green spaces in the area.

“If it was just about parking, okay, but that’s a lot of changes,” said Cathy Frank. “Four buildings is a dramatic impact – it will destroy my property values. I look at this design and find it sad…There is wealth in parks and green spaces, and this plan cuts it.”

Continued:Here’s where we stand with recycling in Oakland County as costs rise and profits fall

The long-term vision to add parking and development to the area through an extension of Bates Street dates back over two decades, to 1996 when ‘Plan Birmingham 2016’ was adopted. Day parking demands which increased significantly around 2013 increased the pressure to implement the plan.

City officials determined through a survey of businesses and property owners that there was a shortage of about 280 parking spaces north of Maple in the city and a shortage of 427 spaces south. They prioritized the north end, which includes the 53-year-old 5-level parking structure on North Old Woodward.

In the proposed plan, the parking structure will be demolished and replaced with a 7-level structure, with three of the levels below ground and four levels above ground level. This, along with further surface parking nearby, would increase overall parking by nearly 500 spaces.

To disguise the parking structure and not make it the center of the area, Valentine said the plan calls for it to be sandwiched between other buildings and disguised as the first floor behind new commercial buildings.

The area’s landscape would also change with plans to expand Bates Street several hundred feet between North Old Woodward and Willits, “integral for entry”, Valentine said. A place in the plan would provide a connection from Bates Street to Booth Park. These are public elements of the plan.

“This will result in more parking, there will be more connectivity between downtown and the adjacent park, more pedestrian amenities with a public plaza, more retail and more reasonably priced housing in this downtown area. central city,” Valentine said. “There would be apartments with a price of $3,000 to $4,500 per month for these rentals, which is sorely lacking.”

The City Board will have another update on negotiations with the developer at a meeting on April 15 and a week later, on April 22, staff will present a recommendation to the City Board regarding the proposed project.

“The timeline for the project is 18 to 24 months, whenever completion is approved, to dismantle the old parking structure and build a new one,” Valentine said.