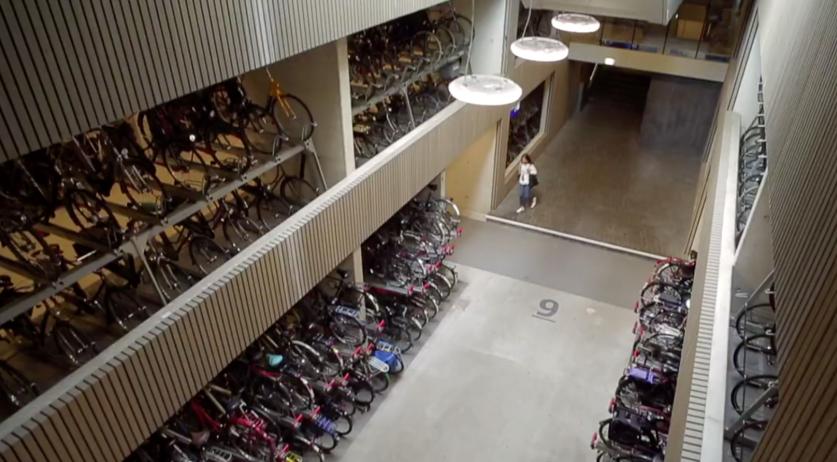 The largest bicycle parking in the world opens its doors on Monday in Utrecht. With 12,656 parking spaces, including 480 spaces for larger or oddly shaped bicycles such as cargo bikes and tandems, parking at Utrecht Station Square easily beats the previous record, held by a bicycle garage in Tokyo with 9,400 parking spaces, reports Trouw.

“From abroad they watch with envy everything we do here for cycling,” ProRail project manager Lidwien van Kessel told the newspaper. “Here, we are on the front line.

From Monday it will also be possible for cyclists to cross the bicycle garage under Stationsplein from Moreelsepark to Smakkelaarsveld and vice versa. The two directions of the main bike path are separated in the garage by bike racks.

Disabled cyclists and cyclists with season tickets will be able to park next to the main cycle path. Other cyclists can opt for a slow ramp to the first floor or to the basement and park their bikes there. Parking in the new bicycle garage is free for the first 24 hours, after which it costs 1.25 euros per 24 hours.

To help cyclists navigate the three-storey bicycle garage, electronic signs indicate free spaces and large numbers on the floor near the bike racks to help cyclists find their bikes.

According to Van Kessel, who helped develop the car park, the design specifically took into account that everyone should feel safe in the garage. “There is light everywhere and you can look at different levels in different places. Also, the parking lot is monitored and there are cameras. As a woman, I will also pick up my bike here at ten o’clock in the evening .”

The parking lot of the world’s largest bicycle garage is expected to fill up quickly, said Richard Maree of RataPlan bicycle storage manager in Trouw. In total, there are now 22,000 bicycle parking spaces around Utrecht Central Station. ProRail estimates that around 30,000 are needed.

Who is building the smart city, again? pic.twitter.com/3DilIGI7W2

NEWBURYPORT – The Newburyport Redevelopment Authority voted unanimously on Tuesday evening to remove 125 parking spaces from the central waterfront in September, a move intended to encourage drivers to park in the new car park.

The parking spaces would be removed from the East and West lots of the Redevelopment Authority on September 16, with preliminary work by the Department of Public Services starting a week earlier.

When issuing the building permit for the new Titcomb Street parking garage, the planning board included a condition that the city must remove at least 100 parking spaces from the central waterfront to make way for a park expanded waterfront, which has long been in the works and is one of the main results expected from the impending dissolution of the Redevelopment Authority.

Planning director Andy Port stressed on Tuesday that the spaces must be removed in time for a traffic study in mid-September that will assess the parking lot’s impact on vehicular traffic through Market Square. He said officials expect this will alleviate traffic, which is often extremely heavy on busy summer days.

The Redevelopment Authority presented a draft plan for the waterfront park expansion at Tuesday’s meeting. Mayor Donna Holaday said the removal of the spaces was also meant to show residents that “the park is coming after decades” of planning.

Asked by Authority Chairman Andrew Sidford when work on the expanded park would begin, Holaday said they would begin “as soon as the NRA is disbanded,” in which case the city would “immediately issue a (request for proposals) for someone design the park.”

Some residents have expressed concern over the removal of spaces and suggested temporary closures while the parking study is underway.

Matt Coogan, the mayor’s chief of staff, said removing the spaces was necessary to get residents and visitors used to the idea of ​​using the parking lot.

“The sooner this change happens, the sooner people will adjust their daily lives,” Coogan said. “By eliminating the spaces now, it will give people time to adapt and that is happening very quickly.”

Holaday added that the city will create an “interim park” in the area, where tables, chairs and games will soon be placed pending the approval process for the expansion.

Writer Jack Shea covers Newburyport Town Hall. He can be reached by email at [email protected] or by phone at 978-961-3154. Follow him on Twitter @iamjackshea.