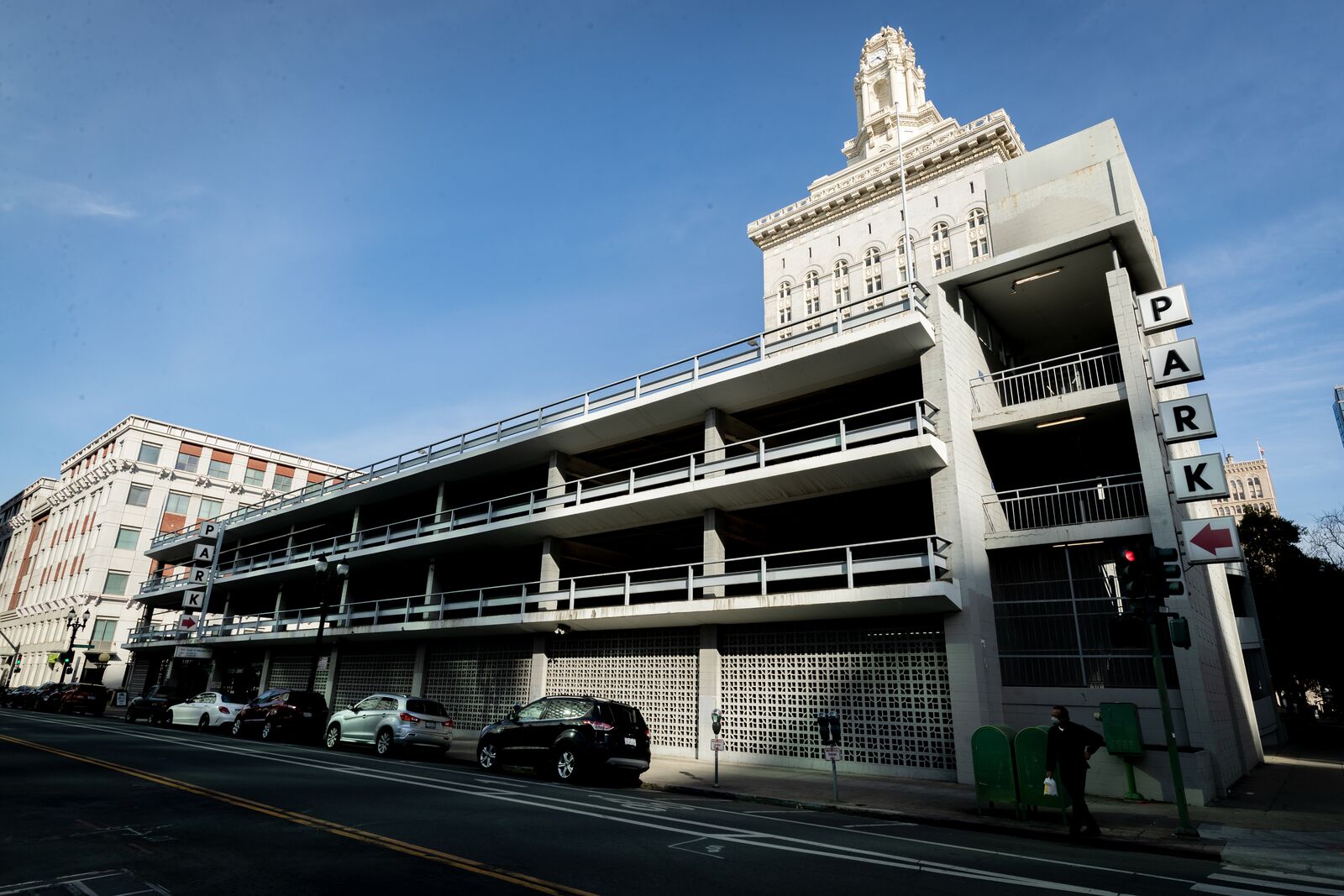 A former parking lot just behind Oakland City Hall could become a fully affordable housing development if two city officials have their way.

Council members Rebecca Kaplan and Carroll Fife want the town to seek proposals from developers to demolish the town-owned Clay Street Garage, a structure closed since 2016 due to earthquake hazards, and replace it with 100% affordable housing .

On Tuesday the council’s Community and Economic Development Committee, which includes Fife, voted to go ahead with redevelopment, but they accepted a recommendation from staff to declare the site “surplus land” first.

This declaration of surplus land would trigger a state law that would require the city to prioritize low-income housing for the site. It also gives staff some leeway to consider proposals that are not 100% affordable. However, the committee’s adopted recommendation, which is yet to go to the full city council for a vote later this spring, lists the 100% affordable figure as a “goal.” In compliance with zoning rules, the ground floor would be businesses.

City staff warned that such a project could be too costly as the city would likely need to help pay for the demolition of the three-story garage, a job that could cost up to $4 million. Market-rate developers would be in a better position to cover that significant cost, staff said at Tuesday’s meeting.

The Clay Street Garage is the second property in the town that Kaplan and Fife have prioritized for redevelopment into affordable housing this year. Last month, they recommended seeking developers interested in demolishing the Oakland Police Department headquarters to build housing on the Broadway lot. This proposal was approved by the board.

Kaplan told The Oaklandside that the city must aggressively pursue affordable housing projects in order to meet targets set by regional authorities.

“We know there is an incredible shortage of affordable housing,” she said. “One of the greatest tools we have as a city to drive affordable development is the use of the land we own.”

Oakland hasn’t even built half of the low-income housing awarded to it by the Association of Bay Area Governments several years ago, and the city has just been told it has to. plan several thousand more in the years to come.

At Tuesday’s meeting, Kaplan said the garage site was a logical place to start.

“It’s on public transit, and it’s near jobs and services,” she said. “This is an opportunity to make sure this isn’t just an abandoned, negative space in our community.”

This isn’t the first time the city has considered redeveloping 1414 Clay St.

In 2018, the city commissioned a study on the development potential of a hotel or office building on the site. The City staff finally recommended an office building, in harmony with the immediate environment.

At the time, Kaplan wondered why the accommodation had not been explored.

“I was surprised that housing wasn’t even mentioned…given the scale of our housing crisis,” she told a public works committee meeting in 2018. proposal for the site never reached the full city council at the time.

City staff said the high land value and high cost of demolishing the garage may make it a less than ideal site for fully affordable development. The cost of demolition “would strain the city’s limited resources available to support affordable housing elsewhere,” Alexa Jeffress, director of Oakland’s Department of Economic Development and Workforce, wrote in a statement. recent report.

Public land at the center of the debate on development

For Kaplan, redeveloping the Clay Street Garage as affordable housing would exemplify the “principle of ‘public land for the public good,'” she said in an interview.

It’s a message that a group of board members have rallied for several years, sometimes using the phrase to take aim at what they see as a lack of urgency among staff or a prioritization of for-profit development. .

In 2018, Kaplan co-authored a resolution calling for a public lands policy, which would have outlined how Oakland makes decisions about whether to lease or sell its property. The city began, but never completed, the process of drafting such an ordinance. Meanwhile, what to do with individual city-owned parcels continued to be the subject of discussion and debate on a case-by-case basis.

Kapland and Fife’s proposal to replace the dilapidated police administration building with a mixed-use development provides for 600 homes, a third of which would be affordable, and shops. The city council voted in February to begin researching proposals and working to move police offices to East Oakland.

Weeks later, the council crushed a controversial, years-old project on city-owned land on E. 12th Street across from Lake Merritt. The council and city administration had given developers UrbanCore and EBALDC numerous extensions over the years to round up finances for approved housing towers, where 30% of units would be priced for low-income residents. The city had to sell the land to developers.

Council President Nikki Fortunato Bas, who successfully lobbied for a temporary homeless shelter at the site last year, has long joined neighborhood activists in urging the city to retain ownership of the land. and build a project with more affordable units.

Jeffress told council his team plans to come up with recommendations on what to do with 14 city-owned properties, including the garage, in June.

The recommendation “will take into account available resources, including staff capacity to manage affordable housing arrangements and financing, as well as site constraints and development feasibility, to ensure the city creates housing as efficiently as possible. affordable on his properties,” she wrote.

Kaplan told The Oaklandside that moving forward with the Clay Street project now is not only practically logical, but also symbolically smart. She mentioned the “not in my backyard” refrain used by some people who claim to embrace affordable housing but oppose projects in their neighborhood.

The city could prove it’s not a NIMBY, she said: “This particular plot is literally our backyard as a city government. It’s right out the window of my municipal office.