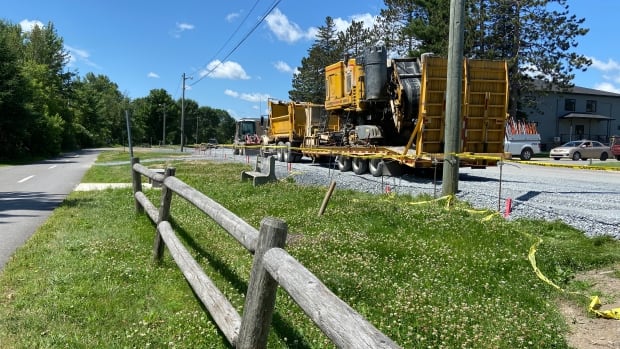 A popular section of a multi-use trail in Fredericton is getting a facelift and more parking.

But not everyone is convinced that creating dozens of new spaces to park cars is the right move to encourage more people to use the trail.

City crews are working on a project to create 45 parking spaces along Station Road on the north side, as well as planting flowers and shrubs to create what the city calls a ‘living wall’ at the edge of the fairway past the north end of the Bill Thorpe Pedestrian Bridge.

According to city traffic engineer Tyson Aubie, the parking spaces will accommodate trail users and allow easier access for travel on the pedestrian bridge.

The parking spaces could have a small positive impact on reducing the number of people driving north to south of the Saint John River, said Benoît LeBlanc, president of the Fredericton Active Transportation Coalition.

But the city’s efforts would be better served improving overall cycling infrastructure or creating a North Side hub for bus services, he said.

“Improving cycling accessibility to the bridge will likely do a lot more in terms of increasing the number of bridge crossings, if that is their goal,” he said.

“If their goal is to help a few people in their cars, I guess they’ll achieve that goal, but I’m not sure it serves the community as a whole.”

The nearby Carleton Park boat ramp has long served as a parking lot for people wishing to access the Bill Thorpe Pedestrian Bridge from the north side.

And last year the city added 20 parking spaces along Union Street in front of the same park.

The idea with the 45 spaces created on Station Road is to give better access to the bridge for people with reduced mobility, Aubie said.

“It was above all a priority because [the walking bridge] wasn’t as accessible to users as it could have been,” he said.

“Let’s say you were mobility impaired, there wasn’t really a way for you to pull out, park somewhere, and then get on the trail,” he said, adding that three of the spaces will be accessible parking spaces.

Aubie said people were already using the land along Station Road to park informally, but it was not being done “efficiently”.

In addition to people with reduced mobility, Aubie said, parking spots are being created for people who might feel like they live too far away to cycle or walk from their house to the bridge, but don’t want to get to the city center by car.

“It’s a great place to park in the morning, hop on your bike, bike across the rail bridge, get to work. It allows more people to use it.”

Aubie said improving the city’s overall cycling infrastructure to make it safer to cycle from other areas to the trails is also a priority, but he didn’t give a timeline for any improvements other than to cite the ongoing project to add bike lanes to Brookside Drive. .

“It’s really high on our list of priorities, but in many cases if we don’t completely dig the road in for some distinct reason, it’s hard to justify tearing down a perfectly good street for [create bike lanes].”

Aubie said work on Station Road is expected to be completed in September.

It is one of 15 construction projects City of Fredericton work this summer.

Patricia Ward uses the trail often as it is a short walk from her home on Barker Street.

She said she thinks the trail could benefit from 15-20 parking spots, but thinks 45 is too much.

“It’s nice to have extra parking spaces but really, I think it’s going to be a little chaotic in some ways with a lot of people,” she said.

Denis Gallant likes to walk the trail during his lunch hour while at work, and he said he thinks the extra parking spots are a good thing.

“Not everyone lives in town, so if you want people to come to town and walk and enjoy the facilities, you have to give them a place to park,” he said.

Part of the work to create the new parking spaces involved removing the building that once housed the City Trail Visitor Center.

Kandise Brown, spokesperson for the Fredericton Trails Coalition, said the group typically hires summer students to work in the building and provide directions to trail users.

However, summer 2019 was the last time the center was open.

Brown said the coalition recently held a community engagement session and there was general support among attendees for another center to be established in a different location.

“So we’re in a listening phase and trying to think about what might be helpful, and what we’ve heard from, you know, from the neighborhood is that lights are helpful, signage is helpful, maps are useful.”

Brown said the Trails Coalition is fine with the Station Road project, but said she would also like to see the streets improved with better cycling infrastructure to make it safer for people to cycle onto the trails. .

“I think there’s a lot of work to be done to make these connections between streets and pathways, to make them feel really safe and inviting for cyclists and pedestrians, but I still think that, you know , every step forward is positive.”

4th Street parking garage has unused capacity, based on midway through 2022 data – The B Square