Hundreds of semi-parking spaces on offer – The Daily Reporter 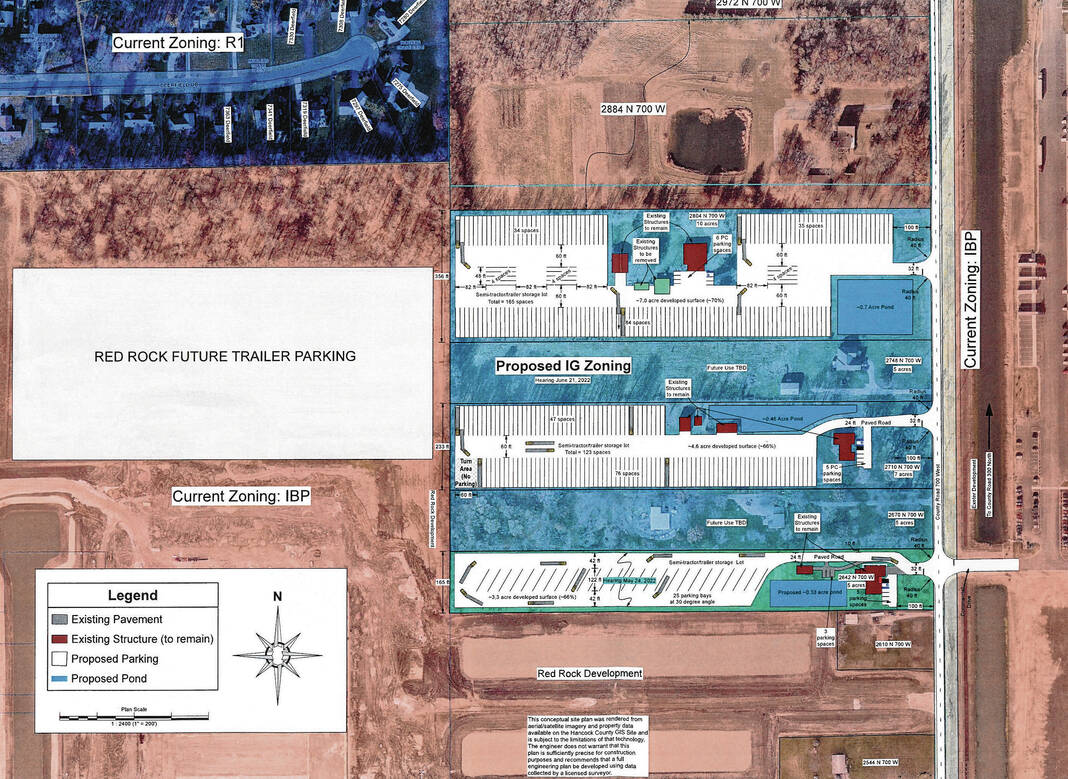 HANCOCK COUNTY – All of the warehouses coming into the western part of the county mean more tractor trailers, prompting to offer parking.

Plans for five lots in three areas totaling more than 600 parking spaces have recently begun to be submitted to county authorities.

Last month, the Hancock County Zoning Appeals Board approved a request by Kamaldeep Singh for a special exception for tractor-trailer parking on 18.5 acres near the southeast corner of CR 500N and 700W. The site is currently an agricultural field with a light industrial zoning designation.

Proposed for the location are approximately 334 semi-trailer spaces and an approximately 6,400 square foot service building with three maintenance bays.

Larry Strange, deputy director of the Hancock County Plan Commission, gave the application a favorable recommendation. He pointed out at the zoning board meeting that while the county’s light industrial zoning district designation is for industrial uses contained within structures, storage of tractor-trailers is permitted as a special exception.

“The other thing to note is that this neighborhood should be used to support industrial retention and expansion in Hancock County,” Strange said, adding that the tractor-trailer parking aligns with that intent.

Zoning board members approved the special exception 3-1 with Jason Faucett, Michael Long and Evan Matlock voting in favor and Byron Holden voting against. Renée Oldham was absent. As a condition of approval, Singh must commission a traffic study to help determine the type of road improvements that will be needed in the area to support the project.

Tim Allen, Singh’s assistant in that venture, told the zoning board the project would be built in phases. He added that truckers would not stay on the property overnight. Twenty to 30 trucks per week are planned initially with hopes for 100 or more per week within a few years.

Allen also said the site could be redesigned to accommodate trucks and trailers in some areas and only trailers in others, which would affect the total number of spaces. Electrical hookups would be available in the winter and trucks would not be allowed to idle. Trailers with cold storage units would be placed away from the perimeter of the lot to reduce noise heard offsite.

Several residents who live near the site spoke out against the proposal at the meeting.

“It will not produce a harmonious relationship with the adjacent properties, which are residences,” she said.

“The traffic is crazy now,” she said, adding that she couldn’t imagine how much worse things would get with more tractor-trailers.

Joe Turner, who owns nearly 60 acres of farmland and woods behind homes across CR 700W from the site, supports the proposal.

“I commend these gentlemen for having the foresight to see what the needs are in the region,” he said.

Late last month, the Hancock County Area Planning Commission voted narrowly to send a favorable recommendation to the Hancock County Board of Commissioners on the rezoning of 5 acres in the 2600 block of North CR 700W from an industrial to general industrial business park zoning designation for semi-trailer parking. If the Board of Commissioners approves the rezoning, they would also need a special exception from the zoning board for parking.

The dimensions of the property are too small for development under its current zoning designation, but would be permitted following the change sought.

Fortville-based 5 Rivers Properties wants to buy John McCarty’s property to create about 25 parking spaces and turn the house on the lot into office space.

“When we moved in, there were just farm fields around us, and it was very quiet and peaceful,” McCarty told the planning commission. ” This is no longer the case. And we knew it would happen one day, we are realistic about it.

Plan commission members voted 4 to 3 for the favorable recommendation, with Bill Bolander, Tyler Edon, Bill Spalding and Renee Oldham in favor and Wendell Hester, Michael Long and Byron Holden against.

Mike Dale, executive director of the planning commission, gave the proposal an unfavorable recommendation. Rezoning the site as general industrial, he said, is not compatible with the industrial business park uses outlined in the county’s comprehensive plan that promotes light industrial activities enclosed in buildings.

Briane House, a partner at Pritzke & Davis, a Greenfield-based law firm, representing McCarty, noted that an application to rezone four properties north of McCarty totaling 27 acres from the Industrial Business Park to Industrial has also filed with the county planning department. general. McCarty said two of those properties had interested buyers for tractor-trailer parking purposes. A site plan he filed with the county shows a total of 276 parking spaces. The planning committee will consider this request at a future meeting.

“One of the things the county is facing … is with the development progress that we have, there’s a need for additional truck parking,” House said.

The County Plan Commission has unanimously given an adverse recommendation to the Board of Commissioners on the rezoning of just over 5 acres at the southeast corner of Mt. Comfort Road and CR 500N from a zoning designation of institutional to light industrial. BDO LLC, of ​​McCordsville, wants to create a to-be-determined number of short-term tractor-trailer parking spaces there before developing a gas station, restaurant or other type of commercial building depending on demand.

BDO would use the house on the property as an office. The house is protected by historic designation; officials had to alter initial plans to demolish it for a roundabout coming to the nearby intersection.

Dale also advised against BDO tractor-trailer parking, noting that the county’s overall plan identifies the location of mixed-use developments, which include high-density residences, retail and some light industry. He added that a county-backed Mt. Comfort Corridor plan and cities along the corridor are also seeking similar uses for the location.

Silvia Miller, a lawyer representing BDO, countered that while the proposal may not match plans, it follows what is happening in the region and is a logical extension of that growth.

If the County Board of Commissioners approves the rezoning, a special parking exception would also be required from the zoning board.