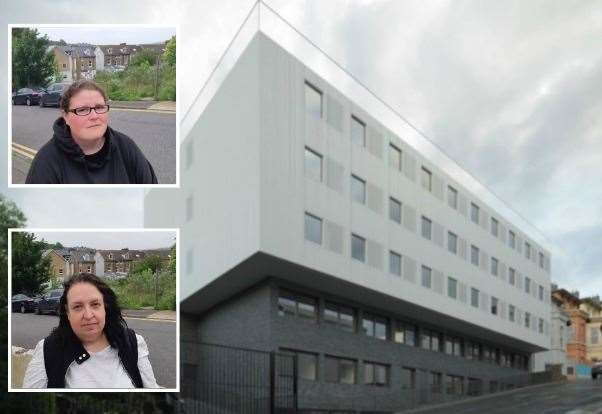 Plans of 45 apartments have been proposed for a residential area with only 12 parking spaces.

Those who already live on Malvern Road in Dover have raised concerns that the building could add around 80 cars to an already busy area.

Scroll down to participate in our survey

The development is planned for an empty plot of overgrown land on an estate already filled with parked cars.

Residents find that there is hardly any space left in the evening when most people come home from work.

Christina Stephens, who lives on the corner of Clarendon Street, told KentOnline: “When I had to get home late at night I had to park on Folkestone Road and drive through an unlit area.

“There are already too few places around here.”

Hailey Drake, who lives a short walk from Clarendon Place, told KentOnline: “I don’t have a car but my mum who is also on this estate does, I know the parking here is already horrible .

“Apart from that, the new apartments would tower over people’s homes.

“I don’t think there should be any apartments there. It would be better to turn this land into a children’s play park.”

Sian Crossland, of Malvern Road, is one of those who registered an objection on Dover District Council’s planning portal.

She told KentOnline: “If the flats will have room for 12 cars, drivers of probably 33 cars will have to find somewhere else.

“Yet people are already coming here and leaving their cars here to catch a train to London.”

In the portal she said she had a five month old and had to park near her house to bring her in her car seat and then bring the buggy.

Another resident on the portal said: “These apartments are completely impractical: 45 apartments and 12 parking spaces do not help local residents in this area to park and will only add to other problems.

“If 45 apartments have two occupants each with a car, that could represent 88 more vehicles parked in the local area.”

The plan provides space for 48 bike spaces, but the resident said: “Dover is not a college town full of students and I don’t see locals buying a flat and moving in with just their bikes.

He added: “The artist’s impression makes it look like a hospital at best, a detention center at worst and certainly not up to par with Victorian housing in the area.”

The preliminary project concerns seven-storey houses on a vacant lot near the junction with Clarendon Street. There would also be 48 bicycle spaces.

The civic group Dover Society accepts that the brownfield site needs redevelopment and that the housing on offer is of good quality but goes against the scale of the development.

Graham Margery, acting chairman of the planning committee, wrote: “We consider this to be completely unacceptable as it is an incongruous structure, which does not correspond to the much smaller houses in the area.

“It has a dominating effect in the neighborhood in addition to obstructing light from adjacent properties. The limitation of parking supply for 45 units is also completely insufficient.”

Kent and Medway Clinical Commissioning Group estimate that 108 people would live in the new development, an average of 2.4 per apartment.

There is already a limited number of parking spaces on Malvern Road due to some yellow lines and junctions. Clarendon Street and adjoining Clarendon Place are also regularly lined with vehicles.

The app is by David Andrew from Leyton, East London.

A report by its THaT (Transport, Highways and Traffic) Consultancy said the area is so close to downtown and public transport that new residents would have little need for cars.

The literature states: “The site is in one of the most accessible locations, in terms of transport, in Dover. It provides easy access by car-free travel to a wide range of schools and education, healthcare, retail, recreation, employment and other services and facilities.

“Most of the daily needs of residents can be met with a 15 to 20 minute walk or a five to seven minute bike ride.

“The site is located just meters from a high quality bus route and Dover train station.”

He added that this application was to provide low-carbon development and that the few car spaces in the apartments would be exclusively reserved for fully electric cars.

A planning statement also on behalf of Mr Andrew said the flats would be placed so that there was no effect on the light for surrounding homes and set back enough so as not to overlook homes further away. close to Folkestone Road.

It also states that the land was left abandoned for 20-25 years, destroyed the area and is now overgrown.

The report said: “Its poor condition adversely affects the character and appearance of Malvern Road and the lives of its inhabitants.”

Highways England said the project would not affect the wider road network, even during construction.

Network Rail had no objections and Kent County Council’s Rights of Way department said it did not need to comment.

Food trucks or their parking spaces? Select Board Mulls which is most valuable