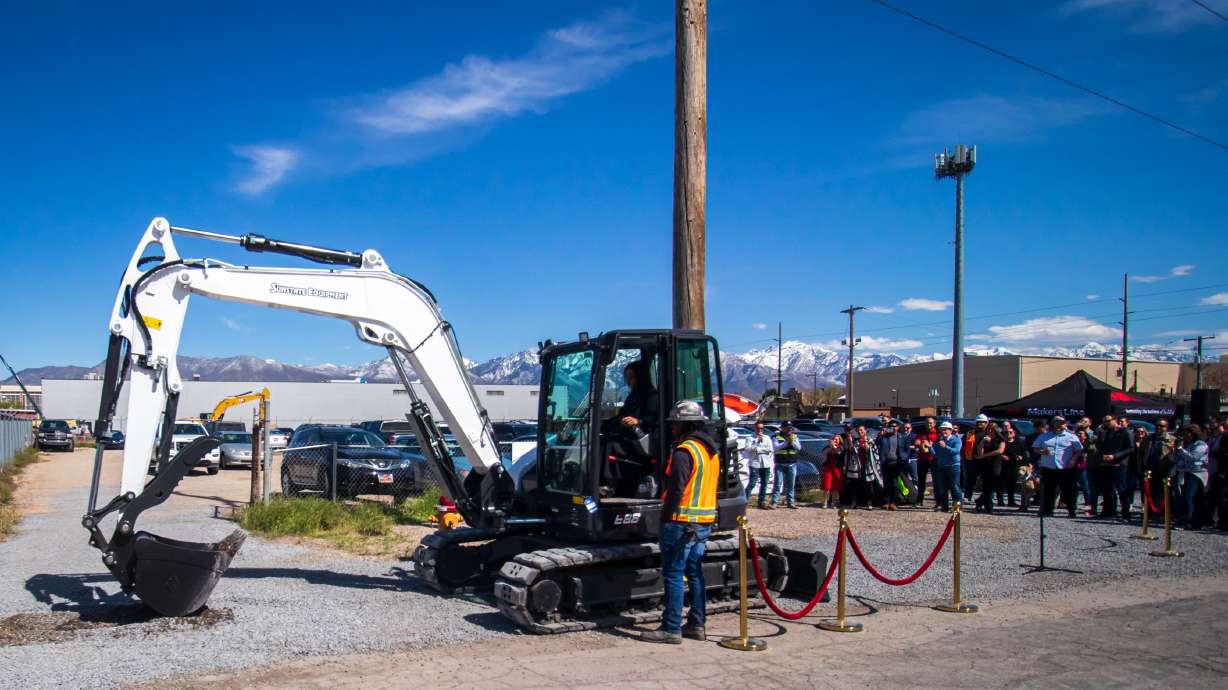 Ellen Winkler, co-founder of Industry, picks up gravel to mark the start of a new parking lot in Salt Lake City’s Granary District Thursday afternoon. The car park is expected to add 1,000 spaces in a growing part of town. (Carter Williams, KSL.com)

These are ceremonies to celebrate the start of some kind of major structure that will one day play a vital role in the community, such as a new office building or facility. But as she stood in front of a crowd gathered outside Industry on Thursday afternoon, she admitted she was generally not enthusiastic about parking lots. Whoever will fill the floor she stood on might be the exception.

Moments after speaking, Industry co-founder Ellen Winkler jumped into an excavator and took the first scoop from the ground to signal the start of a parking garage project that will bring nearly 1,000 spaces parking lot at the Granary District, located directly to the southwest. from downtown Salt Lake City.

“What’s happening in the Granary (district) is really, really unique,” the mayor said. “For those of us who are long-time Salt Lakers, we might not understand how cool that is. There aren’t many capital cities…that have such a giant neighborhood that’s so ready for redevelopment, which have overlay qualified opportunity areas and is right next to the town center.”

The seven-story parking lot itself is located across from Industry, 650 S. 500 West. The company essentially laid the groundwork for the neighborhood’s future a few years ago, turning a former silver smelter into a co-working space for around 500 jobs from different companies that rent space in the building.

However, the neighborhood’s growth in recent years has led to an abundance of on-street parking and crowded parking lots that simply cannot accommodate everyone trying to get around. Jason Winkler, co-founder of Industry, said the project had been in the works for about four years, but had been delayed by a few hurdles, including COVID-19.

However, the project has not changed much since. The structure is expected to be 350,000 square feet, including 12,280 square feet of retail space on the ground floor. Construction is expected to take 16 months before being completed in the third quarter of 2023. Construction company Makers Line, one of a dozen companies assigned to the project, lists it as a project costing more than $25 million. .

“We all care so deeply about this neighborhood and its future,” added Tami Door, CEO of Denver-based Q Factor, the developer of the structure. “This next step with this parking lot is actually going to be an incredible benefit to the community, supporting the people who live and work here, and will be another great way to connect the different neighborhoods of our downtown and downtown neighborhoods. city.”

Although the neighborhood hasn’t been much to see in the past, Mendenhall said the success of the industry has inspired tech startups to reuse old buildings as well, which she says helps maintain the affordable neighborhood and keep its character intact. It is also more environmentally friendly to reuse old buildings than to tear them down and build something new in their place. She hopes this will help keep businesses that have been in the area for decades.

The parking garage will reduce the need for smaller car parks spread throughout the district so that the land can be used for other purposes.

It also plays into the future of the Granary district, which is at the center of the city’s major redevelopment plans. For example, it is located a few blocks from the large Fleet Block project that city leaders are currently trying to piece together.

With the growth of the state and city and the increase in new buildings downtown, the mayor says it’s really only a matter of time before the district of Granary becomes an extension of the city centre. Well, the city center with a different character.

“The technical definition of what downtown Salt Lake City is is outdated. I think we’re all aware of that,” she said. “Downtown is growing and what will be the Granary district will, over time, be a natural continuing extension of downtown, but a more creative, artistic, creative space that’s teeming with people living here, working here, tech companies from start-up to full-scale operation.

“It’s something we can incorporate into our downtown,” she added, “and it’s something that already defines who we are as a city.”

Carter Williams is an award-winning journalist who covers general news, the outdoors, history and sports for KSL.com. He previously worked for the Deseret News. He is a transplant from Utah via Rochester, New York.